Is Tech Adoption Part of Your Plan? 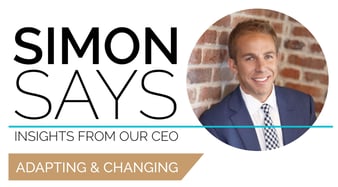 As we enter into the “Fourth Industrial Revolution” we’re on the cusp of technological advances that will fundamentally alter how we live and work. While the “Third Industrial Revolution” introduced us to computers and automation, the fourth brings with it artificial intelligence, robotics, the Internet of Things, autonomous vehicles, quantum computing, and nanotechnology.

A new type of Industrial Revolution

It appears that professionals today are beginning to feel the competitive and financial pressures of this “Fourth Industrial Revolution”. Many workers, and even just individuals on a personal level are beginning to realize they must take some action to adapt. To stay relevant in our current industrial revolution, we have to find ways to use technology to shape our futures.

Make tech adoption a part of your plan

Technological advances are driving personal and business growth in almost every sector. But unfortunately, we often get comfortable in our current situation and we don’t see the idea of changing as a priority. We don’t actively pursue new ways of thinking or adopt new technology because we tell ourselves “if it ain’t broke, don’t fix it”.

Don’t get so wrapped up in immediate concerns that you forget to look ahead. Plan for, and pinpoint the benefits of implementing new technology. Even if you don’t personally use the technology, familiarize yourself with it. Better position yourself to adapt to technological changes in society. Having and maintaining a certain skill set NOW isn’t enough in itself to stay competitive in the fastest-moving, and most competitive economy we’ve ever seen.

The adoption of technology by consumers is shifting how businesses and retailers need to adjust their approach to technology as well. It takes culture and effort to adopt new technology and change in order to keep up with consumers. Many retailers that are struggling today once had a business model that worked, but they didn’t react to the changing times. They didn’t adapt until they needed to, or until it was too late.

Consumer habits are shifting dramatically, and people now have more choices than ever before. For retailers, leveraging technology to enhance HOW they sell, distribute, and meet overall demands will likely lead to greater success down the road. It’s just a matter of whether retailers can effectively manage and stay in stride with technology because if people and businesses don’t, they will fail.

Because, while we may think that technology is moving too fast for us to keep up, it is still a controllable force. As Klaus Schwab, Founder and Executive Chairman of the World Economic Forum notes, “All of us are responsible for guiding its evolution, in the decisions we make on a daily basis as citizens, consumers, and investors.”

Tips for Attracting Customers at A Grand.. read more
Is Adaptive Reuse Right for your Business? read more
Do's and Don'ts of Buying a CRE Property read more
Three Legal Roadblocks to Avoid in CRE.. read more
How to Choose a Commercial Developer for Your.. read more
TENANCY
TYPE