Shauna Wekherlien recently got a conventional loan to help her Scottsdale company relocate and expand.

The theory is that the faster the economy and business confidence improves in Arizona, the larger the number of small-business loans there should be, and a greater amount of money should be hitting the market.

But the number of SBA loans in Arizona and Phoenix has remained relatively flat, said Craig Jordan, a lender relations specialist with the U.S. Small Business Administration.

“It probably means that the economy in Arizona has been pretty stable,” he said. “You’ve seen some slight differences in the number of loans, but yet the amount of money that’s been put out in the community has been relatively stable.”

SBA-backed loans, which come with a government guarantee, only show part of the picture of small-business borrowing as businesses may opt for financing alternatives. SBA numbers can be an indicator, however, of the overall market.

Up and Down market

Data from the Phoenix area shows a similar story. SBA loans to Valley businesses are on pace for a slightly slower year based on number of loans, but overall financial volume is consistent with last year.

This suggests businesses are opting for larger SBA loans.

“It may be businesses on the larger-end are looking for a little bit larger loans for expansion because you’re seeing collateral values increase with the residential market going up,” Jordan said.

“I think that when we were in the recession there were cases where banks would make loans in certain circumstances, but only if they had the SBA guarantee as an enhancement,” Sellers said. “As the economy is recovering, I think there are going to be some cases now where they may be willing to grant the credit on conventional loans without the SBA guarantee.” 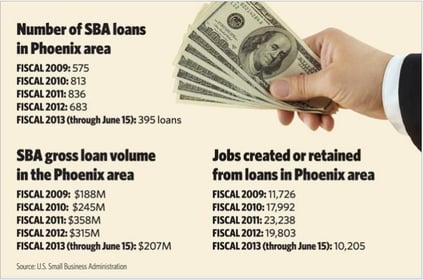 owner of Tax Goddess Business Services PC in Scottsdale, took out a loan when she spotted an opportunity to buy a building.

Wekherlien planned to apply for a loan at a single bank. After a friend advised her to seek out competition, she applied at five banks. Some lenders went the SBA-backed route while others offered her conventional loans. In the end she opted for a conventional loan from MidFirst Bank.

“The SBA loans are very fee-heavy,” Wekherlien said. “It’s a great program, but you’re paying a lot more in fees than if you go with a conventional program.”

Some bankers say they see demand from small businesses for all loan types slowly increasing, while others report demand is still weak.

West Valley National Bank President and CEO Candace Wiest said demand for small-business loans was slow in the first few months of 2013, but picked up in April and May.

“The economy is better but it hasn’t been consistent so small businesses don’t tend to borrow money or take on additional expense,” Wiest said. “I think the political uncertainty with the election in 2012 certainly had a lot to do with that, and the implementation of the Affordable Care Act certainly scared a lot of these guys into wondering what their costs were going to look like.”

Jeff Gaia, chairman and CEO of the Biltmore Bank of Arizona, said he is seeing the strongest demand for small-business lending in the past four years.

“Our small business customers are feeling much more upbeat about their businesses,” Gaia said. “I don’t think they are going crazy, but you are generally seeing improvement in revenue growth and as a result loan demand has improved quite strongly over the course of the six or seven months.”

With increased regulations and new compliance standards, banks are cautious about who they lend to. Some small businesses still report having a hard time accessing credit.

The regulatory environment created a more conservative approach to lending in many banks, according to Michael Thorell, president and CEO of Pinnacle Bank.

“We’re operating in a regulatory environment where we really don’t know what the rules are yet,” Thorell said. “It inherently creates a conservative approach to all your business lending… because there’s a concern that you don’t want to make a mistake.”

Some businesses still may be unable to qualify for loans because of weak cash flow, lack of collateral or poor credit.

Certain business types — restaurants, small construction companies and those in the hospitality industry — have a difficult time accessing credit, according to bankers.

“Small construction companies are having challenges,” Thorell said. “I think there’s a definite concern and fear that that sector has not recovered because they were hit the hardest.”

Small businesses may be finding funding solutions in alternative lenders if they can’t qualify for a bank loan or don’t want to deal with the paperwork.

“You’ve got all these alternative lenders that focus on smaller loans that may be picking up the slack,” Jordan said. “These smaller loan lenders typically move into markets and establish themselves when you’ve got an increasing or stable real estate market, because most of the collateral they would take would be real estate-based.”

Joshua Simon, owner of Scottsdale-based SimonCRE, a shopping center redevelopment company, is in the process of taking out several commercial real estate loans from banks.While banks seem more willing to lend now than in the past several years, the amount of paperwork required has increased, Simon said, as banks have tightened underwriting standards.

“A few years ago, bankers wouldn’t even return my calls, but today there are bankers that are calling,” Simon said. “It’s not as bad as it was in 2009 and 2010, where everyone was figuring out how much they were going to have to write down on their losses on loans. But now they are very cautious about who they lend to.”