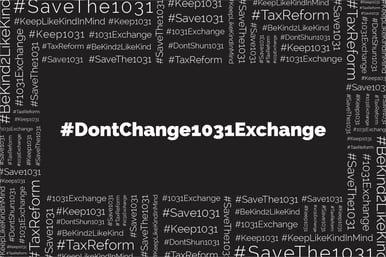 Republican lawmakers are proposing a tax reform blueprint for 2017 that would bring sweeping changes to the tax code for the first time since 1986. The question becomes: will the commercial real estate industry still be standing tall when the dust settles?

We have to be at the forefront of these tax reform issues and we have to save 1031.

We just don’t know how the tax reform will affect the real estate industry, and subsequently, the economy. As an industry that may be deeply affected, we all must stay informed and take a stand to ensure that commercial real estate doesn’t fall by the waist side because of these threatening tax revisions.

The plan, titled “A Better Way”, proposes an array of changes, with several having a significant impact on commercial real estate. These include the elimination of property depreciation and taxation of carried interest as ordinary income. The changes to carried interest structures would significantly increase the tax liability for investors, an increase of somewhere between 19.6 and 13 percent. The problem is, in real estate there are different types of partnerships, different types of carried interest, and different amount of risks for investors. The issue isn’t black and white and the reform to carried interest shouldn’t be either. If the reform is included, real estate partnerships and joint ventures may take a big hit.

One of the most important issues to watch, and the biggest hit for the industry is the proposed elimination of Section 1031 of the tax code. This would put the industry in the path of increased cost of capital, slowed rate of investment, increased asset holding periods, reduced transactional activity, and a host of other effects that could spell doom and gloom for the industry for years to come. These are effects that will completely alter real estate activity and investment for the worse, resulting in industry contraction, disruption of many local property markets, harm to both tenants and owners, and potential job losses.

The commercial real estate industry is staring down devastating effects if 1031 exchanges are eliminated.

And that impact not only slams the real estate industry hard, but the entire economy. Over a 10-year span, we’re talking up to an estimated $131 billion decline in U.S. GDP, according to a 2015 analysis by Ernst & Young. The same study estimates that investments would drop by $7 billion, and labor income would fall by $1.4 billion in the long-run.

The Questions that Lie Ahead

This tax reform, as it is now and with the elimination of Section 1031, brings up some serious questions. Is this going to create a ripple effect on other industries? Will this result in contraction of our economy? What are the negative impacts on small businesses and start-ups? Ultimately, will these negative impacts on the economy be offset by lower tax rates? We must keep asking these questions, finding the answers, and making our voices heard.