Where Do Cap Rates Go From Here?

In mid-March the Fed decided to raise interest rates for the second time in three months. That raised the question, where do cap rates go from here? And is this the new “normal” for interest rates?

The increase sends the funds rate to a target range of 0.75 percent to 1 percent and sets a likely path of regular hikes ahead. The Fed still plans to move slowly because the economy continues to grow slowly, but estimates are that we’ll see increases again in June and December.

Where do cap rates go from here?

These rate hikes are creating some concern within the commercial real estate industry that cap rates will move in lockstep. Due to the economy’s low interest rate environment in recent years, a perception of higher interest rates equating to higher cap rates is being created. But overall, this is kind of a false notion to think they should move in conjunction.

In fact, one of the most recent periods of increasing interest rates (between 2005 and 2007) saw rates rapidly jump up from roughly 2% to 6%. Compared to the proposed rate increases currently in the works, these mid-2000s hikes were drastic. Yet, if we take a look back at cap rates during this same period, they actually decreased from low-7% to mid-6%. Additionally, pricing for all retail within that period jumped from nearly $140/psf in Q1 2005 to around $170/psf in Q4 2007. 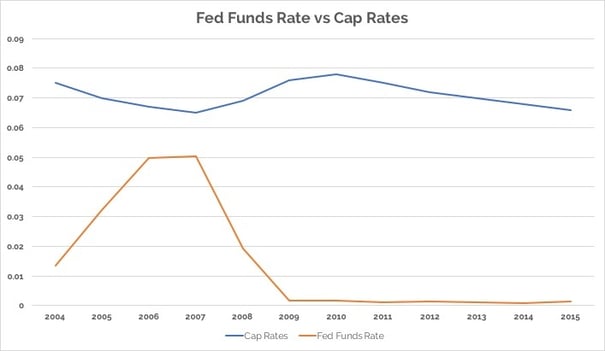 With all of this in mind, we shouldn’t lose sight of the fact that increasing interest rates also indicate a healthy, growing economy. As the economy improves and interest rates move up, we’ll see a rise in inflation and a greater demand for commercial real estate, especially in product types that have seen strong rent and NOI growth. So while we’ve seen slight upticks in cap rates in the last 8 months, many within the industry are still seeing rates within the mid-5% to mid-6% range, on average.

Additionally, the pace at which cap rates will increase is “likely to be muted by strong capital inflows to commercial real estate from foreign and domestic institutional sources”, according to Spencer Levy, CBRE’s head of research for the Americas.

One of the more concerning issues for real estate professionals might be the $4.5 trillion in assets on the government’s balance sheet, bought mostly during the financial crisis. As the rates increase, the interest the Fed pays on those assets also increases. The Congressional Budget Office expects federal interest payments to double over the next decade.

Ultimately, this means they are paying banks more to keep excess reserves, which essentially prevents those banks from lending hundreds of millions of dollars in reserves to the private economy. So for their own benefit, the Fed will have to maintain a reasonable pace of increases.

Is this the new “normal” for interest rates?

So, is this the new “normal” for interest rates? They’re historically low, and have been for the last 8 years. Because of this, our economy has adjusted to rate levels they’ve come to define as “normal”. Despite the recent, and planned hikes, we’re still looking at rates that are far lower than pre-recession levels. And perhaps we’ll never get back to those levels.

For many industries, and the economy as a whole, this means we’ve essentially adapted to this economic environment. So, what are seen as historically minor upticks in interest rates, will more than likely, not have the negative impacts on the commercial real estate industry that some may perceive.

The important takeaway is that if interest rates, coupled with increased demand, continue to remain fairly low and increase only gradually, the commercial real estate industry could very likely be primed to benefit from these market conditions.

As the Commercial Real Estate Industry Slows,.. read more
How Rising Interest Rates are Good for Real.. read more
How to Hire the Best Architect for Your Retail.. read more
Our Top Blog Posts of 2021 read more
Post-Closing Issues in CRE & How to Avoid Them read more
TENANCY
TYPE