Whether we like it or not, challenges, oppositions, and delays all have their place in the commercial development process.

Whether dealing with municipalities or facing difficult economic trends, project timelines face a number of potential pitfalls, some avoidable and some with varying degrees of difficulty.

Let’s take a look at a few broad elements that can drastically impact your project timeline and can cause greater setbacks in the commercial real estate development process.

In some instances, depending on the municipality, entitlements and approvals can take anywhere from a few weeks to upwards of a couple years.

And that’s because there can be a laundry list of different issues you’ll face, including:

Underestimating the permit process can sometimes shock you and squeeze your project schedule - and cost - if permitting takes longer than expected. 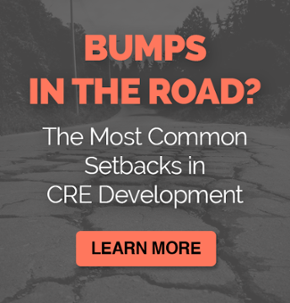 Municipal groups should be educated on the realities of new development projects early on to avoid hiccups and prolonged delays in later stages.

The lack of communication with municipalities and the local community can leave those entities in the dark and cause delays. Failure to connect with local residents can result in missing out on valuable support for a project.

Additionally, communication gaps between the tenant, the developer, and the general contractor can result in a failure to pass the right information at the right time. Not knowing where all involved parties stand on a project leads to a disjointed development and possible perceived mistrust of the developer.

There is no avoiding the fact that certain building materials and construction components for a commercial project will involve long lead times.

Not ensuring that those lead times are worked into the construction schedule can result in other stages of the build being held up while waiting for crucial materials. You must be able to work many required facets for approval concurrently instead of linearly, where possible, to pick up time and keep the project moving forward.

On top of long lead times, contractors and developers have also faced rising material, fuel and other non-labor costs in recent months and years due to a variety of reasons from natural disasters in the Gulf region to international trade tariffs. From March 2017 to March 2018, the producer price index jumped by 13.7 percent for lumber and plywood, 11.4 percent for aluminum mill shapes, and 4.9 percent for steel mill products.

The question becomes, at what point do the higher costs of building materials result in projects being shelved or abandoned? And that’s when issues really arise.

While some labor statistics seem to indicate that the construction labor shortage is seeing improvements, there is still a significant shortage resulting in longer lead times for projects.

According to a survey of top construction lenders, current pricing and labor issues have 87% of respondents worried that projects will run behind schedule.  Additionally, 77.5% of respondents said they experience occasional or frequent material and labor shortages.

The lack of enough skilled workers and a narrow talent pipeline has added extra hurdles, time, and costs to many current projects.

Keeping projects on schedule is no easy task. But planning accordingly, anticipating the potential pitfalls, and having expert guidance can help keep your project from going from difficult to impossible.