Despite some belief that the commercial real estate sector may soon see a slowdown, investment activity expanded in Q2 2017. Overall transaction volume increased by 15.6 percent from the first quarter to $105 billion.

And there are still several important factors that are driving demand in the real estate investment market. 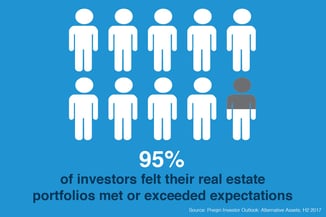 According to recent data from NCREIF Market Value Index, commercial real values continue to increase quarter over quarter and are reaching new highs.

Continued declines in vacancy rates and rent growth are playing vital roles in bumping up rate of return and net operating incomes. According to the same NCREIF data, there was a 5.1% growth in net operating income in the previous year, up from the 3.2% long-term annual pace.

“Low vacancy rates and rent growth, combined with the strong property fundamentals are driving up net operating incomes within the industry,” says SimonCRE Founder and CEO Joshua Simon. “For retail in particular, absorption is still outpacing supply which is driving up demand and driving values up.”

And according to a Preqin survey taken in June 2017, 95% of investors surveyed felt their real estate portfolios met or exceeded their expectations over the past 12 months.

Commercial real estate has definitely benefited from overall stability in the United States economy, including GDP growth and strength of the labor market. Additionally, the lessening of policy uncertainty is playing a role in investment activity.

The much talked about tax reform and potential elimination of Section 1031 have caused many in the industry to reevaluate their investment strategies. After an initial pause at the start of the current administration, investors are starting to see a little more clarity and less trepidation in the markets. While it remains to be seen how reform will unfold and what it will mean long term for the industry, in the short term, investors are making the most of current conditions and leaning on a steadily expanding economy.

The increased value of commercial real estate assets combined with the risk aversion net lease provides, are drawing investors to seek yields more than ever before.

“In particular, demand remains strong for creditworthy net lease deals with rental increases in their initial lease term,” notes SimonCRE’s Director of Capital Markets and Dispositions Blake Curtis. “As such, we are seeing many tenants changing the structure of their leases to account for this demand. It is give-and-take. So, as an investor, which do you sacrifice? Lease term or yield/growth?”

Either way, as previously mentioned, investors are generally satisfied with their portfolios, which in turn is drawing more demand for potentially higher yields in the current cycle.

While the Federal Reserve raised interest rates three times since last December, it still remains considerably low - hovering around 1.25%. And whether or not interest rates hikes are set for the coming months, they will still likely remain at historic lows. Prior to the Great Recession, the rate was above 5% and in 2000, with a strong economy in hand, the rate held above 6%.

So, where do cap rates go from here? Despite some concern that they’ll move in lockstep with interest or 10 year treasury rates, it seems unlikely that cap rates will rise as quickly. In fact, the last time our economy saw periods of increased interest rates, cap rates actually decreased while pricing within that period jumped. Further; the 10-year treasury remains low as well - 2.13% - which should help keep bank lending rates, and all other interest rates, down.

Currently, cap rates remain near historic lows at an average of 4.47% due in large part to strong demand for institutional-quality assets.

The landscape for lenders has become far more competitive.

According to CBRE’s Lending Momentum Index, loan closing increased between March and June, and are up 27% from last year.

Additionally, borrower interest for CMBS loans and the availability of capital is continuing to increase, reaching $38.8 billion at the end of the second quarter, further signifying a strengthening CMBS market for the second half of the year.

And as of June, private debt managers held $205 billion in readily deployable capital, up $8.9 billion from December 2016.