In addition, she has one more vital company role: She gave birth to the founder. Shortly after launching his firm in 2010, Joshua Simon hired his mom as a full-time employee.

"There is no bond stronger than a mother to their child, so I have the best person at the helm where the money is," says Joshua. "I know she's always looking out for my best interests." 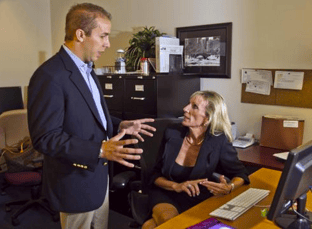 Whether it's bringing on a bookkeeper, board member or top manager, many entrepreneurs have turned to a very familiar — and familial — resource: their mothers.

Perez Hilton, a celebrity blogger with a growing media company, hired mom Teresita Lavandeira for personal tasks such as walking the dog and getting gas in the car. She didn't like her previous job, he says, and this works out well for both of them. She gets paid, he has more time to focus on the business, and they can spend time together.

"I get to see my mom every day," Hilton says. "It really adds to my life."

In hiring their moms, founders often gain much more than an able-bodied worker, says Wayne Rivers, president of consulting firm The Family Business Institute. They also reap loyalty, honest feedback and an often-mature perspective — as well as an employee they can trust with office keys, bank account passwords and company secrets. "You're not worried about your mom ripping you off," he says.

While every family is different, a mom-turned-employee is usually more of a caretaker than a dad. "If you generalize, men tend to have a higher desire for dominance and a lower desire for harmony, and women are the opposite," Rivers says.

Not always an easy path

Yet, working with any close relative can be treacherous territory, say family business experts. When in a professional relationship with a parent, sibling, cousin or other kin, problems can easily permeate off-duty family time. Childhood insecurities can arise during business meetings.

And when a mother is an employee of her son or daughter, that presents unique challenges.

"Children stop being children at some point, but parents never stop being parents," says Rivers.

A protective mom may harass a client about an outstanding bill, while an overzealous one may pitch potential customers too aggressively.

There's also the chance that a parent will bristle at being told what to do. "Mom and Dad aren't always so good at taking instruction or orders from their children." says Rivers.

In addition, the salary situation often becomes a sticky subject. Some moms want to work for free while a child wants to pay them. In other cases, a mother may want a raise, but her child might not have the funds to give her that salary boost.

For the child, it can sometimes be awkward to manage the person who raised them.

Faith Amon, founder of Orlando graphics design firm Frecklefoot Creative, has worked with mom Linda for about six years — but says she still feels guilty when she criticizes her for such actions as being "a little heavy handed" in e-mails to clients who owe money.

Linda says that her daughter's communication skills are fine: "If something is not quite right, she knows how to phrase it so it's not going to be hurtful."

For her part, Linda works to keep her maternal urges in check. "I try not to be a mom," she says. "I try to be a colleague. But every once in a while, that mom comes out."

For instance, she says she responds professionally to those delinquent clients, but when someone doesn't pay a bill, it bothers her. "It's almost like an insult," she says. "It's like, 'How do you dare do that to my daughter?' "

Getting to know you

Williams, owner of MattBeth Construction in Sunrise, Fla., made a surprising discovery after hiring his mom to manage his company while he was overseas: She was fallible.

"I thought my mom was superwoman and that she would take care of everything," he says. "But the first week I had her in the business, we lost tons of money."

His mom, Rose, is intelligent and had professional experience in the construction industry, so he figured "that she would just come in and take the reins and not need any instruction."

He quickly realized that she needed guidance.

Williams' initial assumption that things would just work out is fairly common in this situation, says family business consultant Rivers.

Often, a child has so much confidence in a mom, they don't treat her like a new employee. "With family, there is that bond of trust," Rivers says. "You may not have a job description for Mom, or you may not make Mom's boundaries really clear."

The key to making this arrangement work is to have frank discussions about goals, compensation, work hours and even if a mother should be called "Mom" or by her first name in the office, say family business experts.

It can feel uncomfortable discussing expectations and consequences, "because you're talking about a role reversal," says Andrew Keyt, executive director of Loyola University Chicago's Family Business Center. But a game plan can help save a personal relationship if the business relationship falters, he says.

You come first; no, you

Even with an open, communicative relationship, it is sometimes difficult for a mom and child to see each other's side, often because they care about each other's happiness.

Faith, for instance, wants to make sure her mother's professional goals are being met. But Linda's main concern is her daughter's success.

Linda says she is satisfied, and what she really wants "is to help (Faith) and to see her business grow."

She helps in many ways. Linda has keys to her daughter's house, access to all her bank accounts and "total access to my life," says Faith.

Sometimes, that can be a bit too close for comfort, she says, but it also comes in handy when she's traveling and needs her mom to handle work issues or access her home office.

"On the one hand, she knows a little too much," says Faith. "And on the other hand, that is so useful and saves the day."

While there can be inherent stress in these mom/child working situations, the benefits can also be big, says Keyt. "Hiring your mother can be something that brings you closer," he says. "You're interacting as adults and (get) closer and deeper on an emotional level."

Jay Nadeau, editor-in-chief at Altadena, Calif.-based Bitingduck Press, employed her mom, Marie, a few months after launching the publishing company. Marie founded a skin-care-focused firm, so Jay thought she could help in areas such as marketing and public relations.

But as a crush of books came in, Jay asked her mom to take a stab at reviewing and editing — and was surprised to learn that she was talented.

"You think you know everything about your mom, but you don't," Jay says. "I always knew that she read a lot, but I didn't know she was so skilled as an editor."

Through their work duties, they've also become closer. "This has really brought us together," says Jay.

Construction company owner Williams says that by working with his mom, they were also able to form a stronger bond.

In spending more time together, he learned about his mom's personal life, her siblings and her past professional growth.

"I realized after hiring her that I really didn't know much about my mom," he says. "I learned to value her as a person and not just as my mom."

"Something else happened — she got to learn about me," he adds. "She was a great mom, but she really didn't know what I did or a lot about me personally. Since then, my mom and I have been more friends as opposed to just mother and son."