Famous as one of the “Grand” old buildings along Historic Grand Avenue in downtown Phoenix, SimonCRE knew the ±36,000-square-foot adaptive reuse project would be perfect for the “adaptive foam” online mattress retailer.

The former O.S. Stapley hardware store was built in 1917 for Orley Seymour (O.S.) Stapley’s headquarters, but the company had been serving Arizona since 1895 in its Mesa location. The company thrived being the closest construction materials supplier to the Theodore Roosevelt dam site. It had served a powerful, worthy purpose to the community before coming to a close in 1962.

In an attempt to revive and preserve its strong character, the property was reused as an appliance store and then an industrial machinery repair shop — but nothing would stick.

Well, after a major redevelopment in 2011 and SimonCRE eyeing it for the Tuft & Needle headquarters, its luck was about to change. The famed historic property would become home to the retailer that would make history of its own by disrupting the entire mattress industry.

Located within the up-and-coming Lower Grand Avenue Business District, the future Tuft & Needle headquarters needed a lot more than just a dusting off to wake this property up. 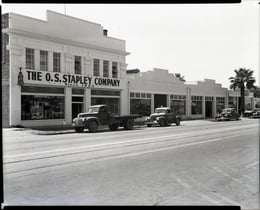 SimonCRE needed to finish up the remaining redevelopment that was necessary to be done.

The decades-old property with historic significance had to be updated for the 21st century. One of the major refurbishing items was to add modern HVAC units on the roof but doing so caused some structural issues.

The development team had its work cutout for them. SimonCRE had to work through the structural issues, which required an exuberant amount of engineering to ensure it was sturdy enough and compliant with the City of Phoenix’s standards. 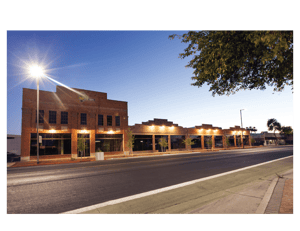 This included having the architect open up some walls, which accomplished maintaining the historic feel but also bringing it up to modern code.

But the remediation efforts didn’t end with the buildings alone. SimonCRE took the steps to bring on board the Grand Avenue Members Association (GAMA), which was very active and passionate about the community. A lot of time and resources went into working with all those who had an interest in the project to ensure it was one that would actually benefit their neighborhood.

SimonCRE had successfully accomplished bringing the emerging start-up to 100% occupy the buildings with a mattress showroom and offices.

The property was sold in March 2018 for $8.73 million. With a combination of SimonCRE’s quality adaptive reuse and the stability of the long-term lease to a now well-known tenant, the Tuft & Needle headquarters was a deal the investor couldn’t pass up.

“This sale really demonstrates the strength of the Grand Avenue District and the demand in the area,” said Joshua Simon, Chief Executive Officer and Founder of SimonCRE, in 2018. “We’re hoping that this district begins to emerge as a vibrant hub similar to Roosevelt Row.”

Also located in the heart of the vibrant downtown redevelopment area, SimonCRE owns a 5,000-square-foot redevelopment project adjacent to the headquarters (view).

This Project Brings all the Tenants to the.. read more
Rally for Big Plans in San Tan Valley read more
A Phoenix (Center) Arising From the Ashes read more
The Right Renovations with the Right Partners read more
From Obsolete to Good Eats read more
TENANCY