The Right Renovations with the Right Partners

There was a tired multi-tenant retail center at the bustling intersection of the U.S. 278 Highway and Cash Road in Camden, AR in desperate need of an update. Without undergoing major renovations, the well-located Camden Marketplace would not be able to lock in the tenants it needed to attract.

Kroger and Walmart had formerly occupied the 90,000-square-foot shopping center, but at the time of purchase it had only a 5% occupancy rate. But before SimonCRE could tackle leasing the spaces, the center was in desperate need of an update. 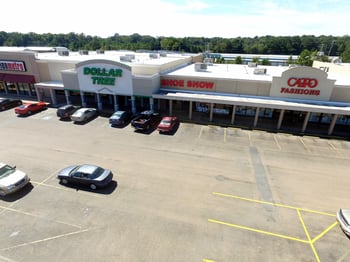 The ultimate redevelopment challenge was gaining interest in the center and expressing the vision to potential tenants. Camden Marketplace had sat nearly vacant for years and nobody could picture the improvements that could be made.

SimonCRE was able to convey the vision in such a monumental way that multiple retailers became interested, even in a post-Great Recession economy where there was reluctance. The full redevelopment plans included building new tenant spaces, store front additions, parking lot improvements, and other upgrades to the property. A major win was backfilling the former Walmart with an Atwoods Ranch and Home hardware store.

Then, SimonCRE partnered with a broker who knew the right tenants that would be interested if it underwent the right renovations. This led to the successful tenant additions of Dollar Tree and Shoe Show to the center.

Also when the redevelopment plans were communicated, an existing tenant, a Cato Fashions store, decided to renew its lease because it trusted in the plans. Furthermore, Cato Corporations signed on another one of its concepts, Fashion Metro, to lease space at Camden Marketplace.

With the identity of trustworthiness SimonCRE has established with tenants, it was able to deliver the shopping center at full occupancy upon completion of the redevelopment. With this large-scale project, SimonCRE displayed its ability to execute and quickly close, leading to several other opportunities all over the U.S.

“Camden Marketplace had been neglected for years, and it was time to redevelop a great piece of real estate in a strong tertiary market,” said Joshua Simon, Chief Executive Officer and Founder of SimonCRE. “Not only did the town of Camden benefit from not having an eyesore property any longer, but the businesses that leased there created between 70 and 100 jobs. That’s a big deal for a small community.”